One morning last year, millions of Americans got into their cars to go to work and discovered they now had the ability to order breakfast and coffee while they drove. Overnight, General Motors had downloaded a new application called Marketplace that operated in their cars’ center touchscreens.

With it, they could order breakfast from Dunkin’ Donuts, takeout from Applebee’s or find a parking garage near their destination. They could interact, in limited ways, with a number of other businesses — and the choices have grown since then.
The transactions are carefully constrained so drivers aren’t distracted. Some things, such as making hotel reservations, can only be done when the car is parked.
GM gets some money from each Marketplace transaction. But for now, it’s far from a cash cow. 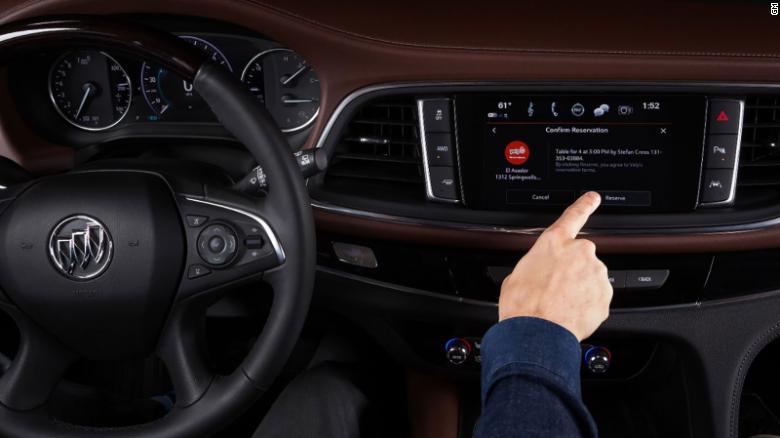 A driver makes a Yelp reservation using the GM Marketplace app.
“I promise you, we are not getting rich off Marketplace,” said Christine Sitek, who heads GM’s various “connected car” initiatives.
Instead, the focus is on helping customers enjoy their time in the car more and doing so safely, she said. But GM is also learning from apps like this about what customers like to do in their cars. And all of that information that’s being gathered means that Marketplace could become a serious revenue source in the future, Sitek said.
GM is getting into the e-bike business
Now, let’s jump a few decades into that future. Let’s imagine that General Motors’ investment in Cruise Automation has paid off and the company now makes cars that completely drive themselves. These cars have no steering wheels or pedals. People just ride in them. So, instead of making one pile of money when a car gets sold, GM now makes a small stack of money each time someone gets in for a ride
And those people might be hungry. Maybe they’ll want a Dunkin’ biscuit sandwich and some coffee. Also, since they’re not driving, they might want to watch a movie or TV show. GM is already building relationships with merchants today and learning a lot about what people want to do and buy when they’re in cars.
By the time this future arrives, GM should be well ahead of the curve.
The path to making real money from these interactions is not to focus too much on the financial part, said Sitek. That will come organically from trying to make the products work better and from learning from customers.
“If I just set my sights on making money, then I’ll lose sight of the customer experience,” she said.
Car companies rush to embrace scooters and bikes
It’s important for automakers like GM to try these sorts of services because, if they don’t, outside companies will simply provide them instead using mobile phone technology, said Michelle Krebs, an industry analyst with Autotrader.com.
GM’s big advantage over other automakers is its decades’ long involvement in car connectivity. Its famous OnStar service was introduced in 1996, a time when cell phones were still in their big, heavy infancy. GM engineers, in a joint venture with tech companies, repurposed 90s cell phone technology to send data back and forth from cars to computers and call centers manned by people who could talk to you over that same connection. That was big stuff back then.
The original OnStar was operated by a handset that looked very much like a 90s cell phone, but with a cable. Those call center operators could, when called automatically after an airbag deployment, call the appropriate emergency responders to reach you wherever you happened to be — even if you couldn’t tell them where you were. 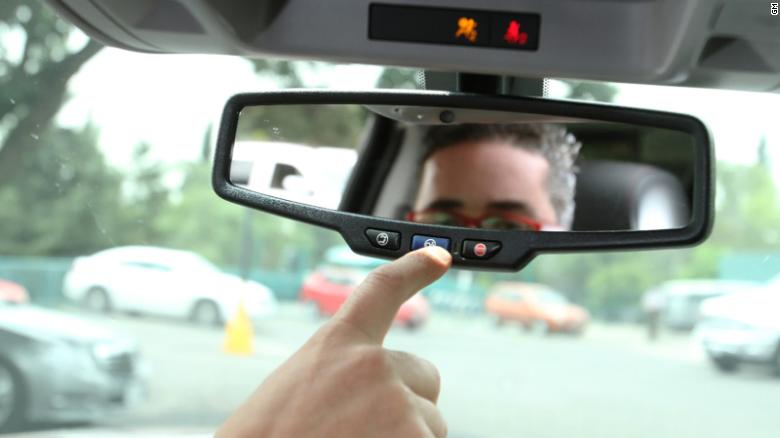 A man presses the blue OnStar button in a GM car.
Nothing like that had ever been done. Just that last part — calling the right first responders for your exact location — required GM building, on its own, an enormous location-tagged database of police, fire and EMS services all across America.
Having OnStar in place has allowed GM, over the years, to experiment with various ways people, cars, and a huge network could interact. The services provided have changed over the years. Today, it’s marketed mostly for its safety benefits, such as the automatic crash alert, which remains its biggest selling point.
OnStar is free for a period of time with virtually any GM car or SUV. After that, subscriptions range in price from $25 to $60 a month.
GM Marketplace, on the other hand, doesn’t require a subscription and it’s free to anyone with a GM car. But, just as OnStar did early on — and is still doing — it’s allowing GM to gather more information about what people, cars and networks do when you put them together. That’s where the future is.
Posted in Automotive